Compete in the Game of Rings during the NBA Finals

2K today announced the next season of MyTEAM for NBA® 2K21 on PlayStation 4 and 5, Xbox One and Xbox Series X|S, Nintendo Switch, Google Stadia and PC arriving tomorrow, June 4. The battle is on for the NBA Championship, and it’s no different in the new MyTEAM Season - “Trial of Champions.” This season, ballers will participate in the Game of Rings -- an epic Triple Threat competition featuring six challengers in the NBA Playoffs where the top scoring NBA player will earn the entire community a guaranteed player locker code.

Season 8 - the Trial of Champions, is a six-week long season centered on the NBA Playoffs, featuring challengers and champions players will use to compete for challenges and rewards including:

Check out the full Courtside Report here for all the details on the latest season and the accompanying trailer here. Keep an eye on the official MyTEAM Twitter (@NBA2k_MyTEAM) for daily updates on the Game of Rings.

Remember that all progress players make on the PlayStation 4 and Xbox One versions of NBA 2K21 will transfer to the PlayStation 5 and Xbox Series X|S versions within the same console family via dual-access. More information is available at the dual-access FAQ. Additionally, NBA 2K21 is now available on Xbox Game Pass, Microsoft’s subscription service, for players that want to jump in anytime. More details can be found here. 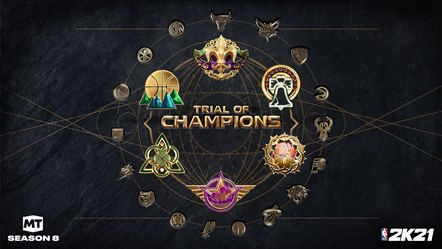 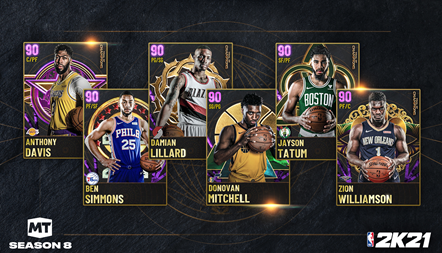