2K and Gearbox Software have announced several new details for Tiny Tina’s Wonderlands®, the highly anticipated, fantasy-fueled take on the looter shooter genre coming March 25, 2022. With launch just around the corner, today’s news takes a closer look at crossplay support, split-screen options, PC specs, and worldwide release timing, so you are fully prepared to dive right into the chaotic fantasy on day one.

As recently revealed, Tiny Tina’s Wonderlands will support crossplay between Xbox Series X|S, Xbox One, PlayStation®5, PlayStation®4, and PC via the Epic Games Store. Co-op is a thrilling way to experience the Wonderlands, with two options for determining how loot drops and enemies scale during multiplayer. Regardless of what platform you choose to play on, you’ll be able to party up with friends across platforms through SHiFT Matchmaking for an unforgettable, fantasy-fueled adventure. Details on how to enable crossplay are available on the game’s official website.

Additionally, crossplay for Borderlands 3 will be coming to PlayStation 5 and PlayStation 4 in the future, enabling you to play with your friends on Xbox One, Xbox Series X|S, Mac, Stadia, and PC via Steam and the Epic Games Store.

If you’re playing on Xbox Series X|S, Xbox One, PlayStation®5 or PlayStation®4, the Tiny Tina’s Wonderlands release time will be dependent on your region, with most regions releasing at midnight local time. In the U.S. the game will be available on consoles beginning at 9 p.m. PDT on March 25. On PC, the game will be available via the Epic Game Store in all markets beginning at 4 p.m. PDT on March 24. For a full rundown of release times by region, please visit the game’s official website. With the right PC setup, you can take in all the gorgeous visual details of the Wonderlands and appreciate the finer points of your Fatemaker's visage. To help you get the most out of your machine, here's an overview of recommended specs for Tiny Tina's Wonderlands, featuring AMD Ryzen and AMD Radeon hardware. Additionally, all the visual options available to you on PC can be found on the game’s official website. Developed by Gearbox Entertainment, the ESRB rating for Tiny Tina’s Wonderlands is T for Teen. For screenshots, key art, and other visual assets, please visit newsroom.2k.com. 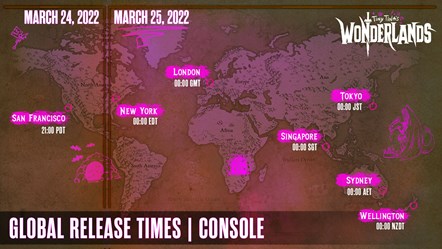 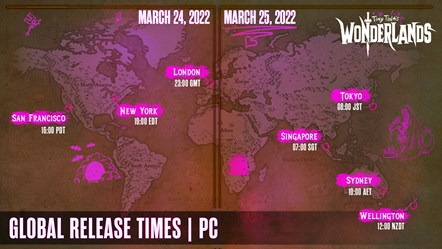 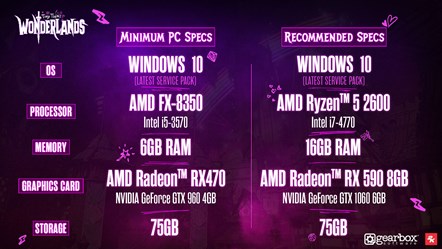