Tune in to 2KFest: A Global Celebration of Basketball Culture and 21 Years of NBA 2K

Tomorrow, 2K will air the inaugural 2KFest, a 24-hour global livestream event bringing together the best of music, basketball, gaming and culture to celebrate the next generation of NBA 2K21. Beginning November 20 at 12:00 a.m. PST and running through 11:59 p.m. PST, the event will feature NBA and WNBA superstars and legends, musical talent and influencers from around the world, while offering exclusive giveaways through the day in the virtual extravaganza. Fans can tune in on the NBA 2K Twitter, with an additional livestream on YouTube.

“2KFest is a celebration of the culture that surrounds the game of basketball. Everything from the sport and the superstars, to the music and the fashion, this is our way to recognize the lifestyle that’s inspired us over the last two decades,” said Alfie Brody, Vice President of Global Marketing at NBA 2K. “In a year that’s been marred by the widespread postponement and cancellation of live events, including sports and concerts, we are proud to bring this experience to our fans and celebrate everything we love about the game of basketball with the 2K community.”

2KFest will be hosted by sports broadcaster, Ros Gold-Onwude, and FIFA World Cup Golden Glove winner and current Real Madrid goalkeeper, Thibaut Courtois, who hosts “NBA 2K Sundays” with fellow soccer and basketball players weekly on his Twitch channel. With the help of some of the biggest NBA superstars and legends, the event will celebrate the history of the sport, and the game. In a series of unique segments and interviews, NBA 2K21 cover athletes, Damian Lillard and Zion Williamson, along with Vince Carter, Anthony Davis, Kevin Durant, Shaquille O’Neal, Candace Parker, Ben Simmons, and Jayson Tatum discuss how they’ve witnessed the sport influence and blend with other facets of basketball lifestyle, including fashion, art, music, and gaming with NBA 2K.

“My NBA career started around the same time as the first NBA 2K, and it’s really amazing to see how the culture has come to life and evolved within the series,” said Vince Carter, 22-year NBA legend. “2KFest is a true global celebration of that lifestyle and the event is loaded with great content for everyone. I’m thrilled to help celebrate basketball’s impact on culture as part of this event.”

Going beyond the court, and in a nod to the impact that music has long had in basketball culture and the 2K gaming experience, 2KFest also includes performances throughout the 24-hour event from some of the hottest artists in the world, including:

“I grew up around 2K so I’m hella excited to be a part of 2KFest this year,” said Multi-Platinum rapper, actress, and entrepreneur, Saweetie. "The soundtrack is fire every year and the 2KFest performance lineup features some of the best in the game. My ICY girls and guys will be in the building and I’m super hyped to perform for them, the basketball and entire NBA 2K gaming community!”

2KFest will be hosted across three different regions around the globe, beginning in APAC, moving on to Europe and culminating in North America. The 2KFest North American segment runs from 1 p.m. PT on November 20 through 11:59 p.m. PT, and includes the following original programming and performances:

Tune into 2KFest live on the NBA 2K Twitter, with an additional livestream on YouTube, and have the chance to get one of a limited number of Digital PS5 Standard Edition Game Codes (See here for rules and eligible countries and/or territories: http://nba.2k.com/ps5-game-codes-giveaway-terms) and exclusive Locker Codes throughout the stream. Void where prohibited. Additionally, only on November 20, players who enter The City or The Neighborhood on NBA 2K21 get a 2KFest virtual sweatshirt for their MyPLAYER. Celebrate across social with #2KFest. Find more details at NBA.2K.com/2KFest. 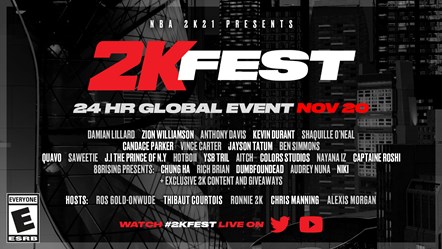