New York, NY – September 18, 2018 – 2K today announced in-game soundtrack details for WWE® 2K19, the forthcoming release in the flagship WWE video game franchise. The soundtrack was exclusively revealed yesterday by WWE Superstars The New Day® and Elias™ – along with global hip-hop magnate and WWE superfan Wale on UpUpDownDown™, WWE Superstar Xavier Woods®’ preeminent gaming YouTube channel. Executive produced and personally curated by several WWE Superstars as a special gift to the WWE Universe, WWE 2K19’s soundtrack features 12 unique songs across hip-hop, hard rock, heavy metal and alternative/indie rock that represent many of the Superstars’ favorites when preparing for a match, on the road, in the gym or relaxing at home. In addition, Apple Music will serve as the premier streaming provider for the WWE 2K19 in-game soundtrack, with the collection of hand-picked Superstar hits available now for streaming at apple.co/wwe2k19.

The WWE 2K19 in-game soundtrack will include the following artists and songs – as selected by WWE Superstars:

“The synergy between WWE, music, entertainment and the WWE Universe is a very powerful one, and our ability to be part of that equation is very meaningful to us,” said Chris Snyder, Vice President of Marketing for 2K. “Working with the WWE Superstars on their selections, as well as having the involvement of a true WWE enthusiast and artist of Wale’s caliber and popularity, adds an important layer of authenticity and reliability to everything we have to offer through WWE 2K19 this year.”

“It was such a great experience partnering with the WWE 2K team to show my support for their new release. Video games and WWE are both such a big part of my daily life, so this was the perfect fit for me,” said Wale. “I can’t wait for everyone to hear “Ungrateful & Thankful” on the WWE 2K19 soundtrack and shout out to my good friends in The New Day for making it their selection.”

“The WWE 2K soundtracks have featured some incredible executive producers in recent years, including Sean ‘Diddy’ Combs a.k.a. Puff Daddy and Dwayne ‘The Rock’ Johnson,” said Neil Lawi, Senior Vice President and General Manager, WWE Music Group. “With music very much at the heart and soul of our business, empowering our WWE Superstars to share some of their favorite songs for WWE 2K19 is a unique way for us to further connect with our global audience.” 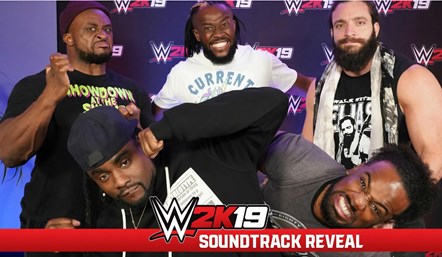